The Mainframe: A Living History

The Mainframe: A Living History 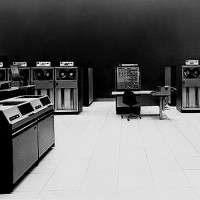 This month is the 47th anniversary of IBM's introduction of the System/360.  In other words, the birthday of the modern mainframe architecture as a computing platform.

They say that one common flaw with mankind is a failure to learn from our history.  Ask any mainframer what is one thing that they take a lot of professional pride in and it’s the history of our computing platform.  Conversations between mainframers nearly always will include discussion on something related to the history of our platform.  Maybe that’s why there are so many references to dinosaurs and other prehistorical terms that get tossed around when some people discuss mainframes.  When you think about it though, the history of the mainframe is not just limited to April 1964 to the present. In many ways, the pre-history of the mainframe is the history of civilization. We could go back to Stonehenge, the abacus, and even Byzantine bureaucracy to see the foundations of modern business computing.  That really is what the mainframe is all about as a computing platform: business computing.

When you think of history, what do you think about?  We all had our favorite school teachers growing up as children.  Many of these teachers had profound influences on our lives and on the kind of person we became.  One of mine was my 9thgrade history teacher, Mr. Brian Gunn.  On the very first day of class Mr. Gunn told our class something that I still remember to this day: history is not about dates and places.  History is about people.

Those of you know me well know that I am very passionate about the mainframe, and its history.  I also love to write.  It’s even more fun to write about something you are passionate about.  So, last autumn I decided it would be a neat idea to write a book on the history of the mainframe, but I did not want to do it myself.  So, I approached my friend and SHARE Board colleague Reg Harbeck on the idea.  Reg works for CA Technologies, shares (no pun intended) my passion for the mainframe and is also an excellent writer.  Reg was really excited about the idea and suggested we involve Bob Thomas as well.  As many of you know, Bob has been in the publishing business for many years, focused on mainframes.  We decided to “go for it”.  We decided to take an approach that Mr. Gunn would have been proud of.  We’re focusing on the people behind the technology.  We’re going to go back to the “pre-history” and the modern history and we plan on being done in plenty of time for the mainframe’s 50th anniversary in April 2014.  There are a lot of things to talk about as well from operating systems to storage so who knows; perhaps it will be a series of books.  In any event, it will be more of a conversational tone (kind of like first person) based on many interviews we will be doing.

As we write the book, I will post excerpts from it in the blog.  I hope you will enjoy them.

For now, Happy Birthday to the IBM Mainframe.