While in the just-over hectic fortnight spent at pre-preparing for a project proposal with the FNRS, the Belgian funding agency for scientific research, I got the sad news that Nicolas Rouche, one of the Belgian pioneers who had helped our research on the Machine Mathématique IRSIA-FNRS had died unexpectedly on the 18th of November 2008. 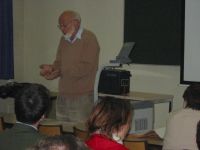 During most of his career at the Université Catholique de Louvain, Nicolas Rouche was a specialist in qualitative research on mathematical functions. Hence among most of his peers, he was Nicolas Rouche, the theoretical mathematician whose pedagogical qualities had made recognised among his colleagues and beyond. It is as part of this line of work that he has created the Centre de Recherche sur l'Enseignement des Mathématiques (CREM), the Research Centre on Mathematical Teaching based in Nivelles.As part of these pedogogical activities, he has published several works on ways of teaching mathematics, exploiting everyday experience as a tool to get mathematics better understood, for instance in his Du quotidien aux mathématiques and Le sens de la mesure. That he also had a computing past came as a surprise to several other pioneers we have met. In fact his name was first mentioned to me in 2002, when, while looking out for 1950s computing Belgian witnesses, he got referred to me by Jean Meinguet, the first director of the Centre de Calcul of the UCL as one of those who had contributed to the construction of the Machine Mathématique IRSIA-FNRS. The machine was the first Belgian computer (1951-1962) , funded by the IRSIA and FNRS and physically built in association with Bell Telephone Antwerp.

After some phone calls while on the current project and some conversations with a man whose voice sounded oddly very young, we met him last December with Marie Gevers for a friendly interview [1]. During this interview, he explained to us his work at Bell between 1953 and 1957, which included work on ferrite cores and on a cheque-processing banking machine we had barely heard about yet for the New York First National City Bank. These were comments crucial to our work on Bell and the Machine IRSIA-FNRS, especially as Nicolas Rouche kindly completed them with follow-up calls and e-mails as well as the sending of images and photographs. Besides for the technical work performed while at Bell, Rouche's comments were superbly enlightening as regards to the inner functioning of Bell Telephone in Belgium, a company he joined following on contacts with 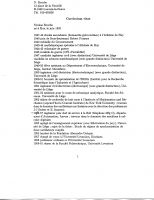 a head hunter of the firm while at the Université de Liège (cf. CV page).

The comments were especially interesting as regards to the ways they suggested the  company to us as very 'American' - compared to other places he had known previously and afterwards.

This Americanness showed first in his pointing out to the management style that he met in the company. His account was filled with patent-seekers staff, head hunters looking out for skilled engineers to recruit in universities, and research leaders seeking out productivity first and foremost. As staff, this made his life odd sometimes, if not difficult, like when he was confronted with having to work out all by himself how to do a computer storage system using experimental - and costly at the time - ferrite core technology, or when being called in to work almost on his own on the inner technical design of the New York City Bank machine. He commented among others on how he got catapulted from project to project according to management's changing decisions as to his role, his ferrite core work being for instance stopped one day on the grounds of its financial costs and unlikely immediate return.

His comments on the making of the Machine IRSIA-FNRS, which he mostly observed, were of the same kind.

The project was a high-profile project paid by the FNRS and the IRSIA, and attracted a fair amount of local political attention, and, correlatively, inner care at Bell too. At Bell work was highly organised, between white-shirt engineers working at neatly arranged desks, all provided with ever-ringing phones and closely surveyed by a project manager sitting in a nearby glass office, and blue-collar technicians assigned their own special space. It was an organisation geared towards productivity. Rouche mentioned for instance the sheer panic and acceleration of work pace, and the frantic checking activities that preceded the visit of prominent American visitors such as Howard Aiken. It is on these grounds of work conditions that he did not appreciate too much that he decided one day to leave, preferring to return to university research. Another of our interviewees abunded on that direction commented on how Rouche disliked the fact to have to smoke outside, among others. If the practice was due to genuine technical concerns for the preservation of the health of electronic circuitry, it was a practice of which modes of enforcement he disliked.

Signing down our note to his widow, I could not help but thinking that his death means the disappearance of someone whose testimony was about Belgian computing history but also about how Bell Telephone Antwerp participated to the broader historical issue of the Americanisation of Belgian society.

So long Monsieur Rouche, and our many thanks indeed for not telling only the story of your 1950s technical work, but also the other tale of how you lived.