The Evolution of the Desk

The Evolution of the Desk

By Katie Miller 0 Comments
A group of students at the Harvard Innovation Lab have created a time-lapsed visualization of the impact of computers, IT, and technology on our lives. The video provides a historical review of the office desk, beginning from the 1980s all the way to present day. The opening scene introduces a desk cluttered with what are now seemingly archaic items - a fax machine, a rolodex, a globe, a radio/alarm clock, a corded phone, an encyclopedia, Yellowpages, glue, tape, scissors, a Polaroid camera, and even an Oxford American Dictionary. 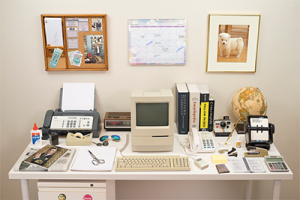 The computer is a Macintosh 128K, the original Macintosh personal computer, released simply as the Apple Macintosh.  It originally sold for $2,495 ($5,595 in inflation-adjusted terms) and was the first personal computer with a graphic user interface - something that previously only available on hardware that cost more than $100,000.  The Macintosh had 128 KB of memory and an 8 MHz CPU made by Motorola, along with a 400 KB, single-sided 3.5-inch floppy disk drive. As the 1980’s progress, we see the Macintosh making way to a more modern laptop, an IBM Thinkpad.  We also see the calculator getting sucked into the computer screen by a Microsoft Excel logo, signaling the emergence of the first spreadsheet programs that were available with a graphical interface in 1985. Shortly after, the glue, tape, and scissors get replaced by Powerpoint, which was launched by Microsoft in 1992 and quickly became the leading slideshow presentation program in the world. 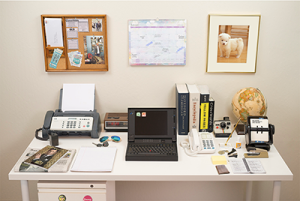 By the mid 1990’s, software and Internet applications begin to disrupt many of the items on the desk. We see an Amazon icon replacing the catalog on the bottom left corner of the desk, a Dictionary.com logo usurping the Oxford American Dictionary, and the classifieds making way to the emergence of Craigslist. We also see a radical in the world of publishing, as the notepad gets replaced by Blogger and the fax machine disappears in favor of Adobe Acrobat and the PDF standard. 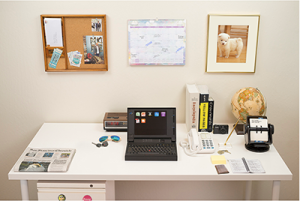 2004 is when the pace of innovation really begins to accelerate, with Google leading the charge.  Google Maps replaces the globe, Gmail wipes away the envelopes, and the calendar on the wall makes way to Google Calendar. Facebook also makes a huge dent replacing our contact and address books, while Skype and Pandora disrupt the phone and radio, respectively. In 2006, we see a refresh of the laptop to the MacBook Pro, and from there, the pace of innovation really begins to take off.  YouTube, Yelp, LinkedIn, and Wikipedia all make their entrance in place of the photograph, the Yellowpages, the rolodex, and the encyclopedia. But it’s Google News that probably makes the most radical of disruptions, all but ending the relevance of traditional print newspapers. 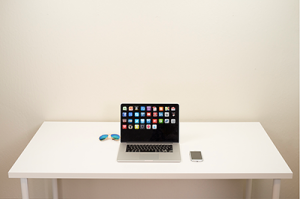 By 2008, we have a nearly empty desk, and this is where things really begin to take off.  Disruptive applications like Box and Dropbox introduce the concept of cloud file storage, while services like Square and PayPal optimize online payments and e-commerce. The last few years also see an emergence of the shared-service economy, with startups like Lyft, Uber, and Airbnb making a dent in traditional sectors like the hotel and taxi industries. All in all, the visualization depicts the radical impact of technology over the last 35 years. Advancements in computer infrastructure, software, and IT have managed to declutter a desk full of dozens of physical items into a simple, empty surface consisting of just a laptop, and a phone. Watch the full video here - Evolution of the Desk.